Salvage: Can You Be Haunted Twenty Minutes At a Time in Luigi’s Mansion: Dark Moon? 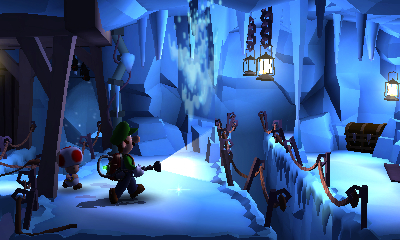 I consider myself to be a huge fan of the platforming genre, from the hammer-dodging, piranha-plant-jumping, side-scrolling days of the original Mario Bros., the hidden secrets of Donkey Kong Country, surrealism of Rayman, and the transition to 3D that for me began with the uncompromisingly difficult Crash Bandicoot before extending into the annoying collect-a-thon hubs of, say, Banjo-Kazooie. But in all my gaming, I keep returning to the sheer perfection of Super Mario World, which dared to not only challenge one’s reflexes but one’s brain: this wasn’t merely about going from the left side of the screen to the right; it was about figuring out how to use enemies and tools to reach otherwise inaccessible secret pipes and alternative exits. It was about finding a key and successfully bringing it to the door that it unlocked. It was about the ghost houses, the glorious puzzle zones that not only expected you to outmaneuver spectral hordes of Boo ghosts, but to outwit them, too. Which is why, perhaps, I have such fond memories of the original 2001 Luigi’s Mansion, which, unlike other Luigi outings like the dismal Mario Is Missing, found a way to mix puzzles and action, as it required players to use the suction (and later elemental) powers of a vacuum cleaner in order to lure out the hiding ghosts, and then to battle them in one-on-one games of tug-of-war. More importantly, it’s why I was so excited to get my hands on Luigi’s Mansion: Dark Moon, a 3DS successor to the original: it’s bigger, better, cleverer, and yet also the victim of some odd design choices.

For one, length isn’t always a blessing. In Luigi’s Mansion, you were limited to exploring one rather large and haunted estate, through which you were given limited direction (a radar) and a minimum of hints. You explored at your leisure, slowly increasing your access through the game’s various locked doors. The game wasn’t long enough or large enough to require much backtracking or repetition: the majority of the game felt fresh and intuitive, building on itself. Dark Moon, on the other hand, takes place in five separate “mansions”: the traditional Gloomy Manor and Treacherous Mansion, the ice-themed depths of the Secret Mine, the hydroelectrically operated (and botanically themed) Haunted Towers, and the mechanical Old Clockworks. From an aesthetic perspective, this makes sense, as it expands the scope of the original game, but because your only tool is a Poltergust 5000, which comes with a flashlight and illusion-revealing black light, it harms the puzzling mechanics of the series: everything is solved in largely the same way, by finding things to suck up and pull. Second, this problem is compounded by the odd choice to break each zone into a series of missions: these are so focused, so brief, and so ultimately safe, that they take away from the overall sense of discovery that was present in the original. It’s not until late in the game that the levels widen in scope, requiring you to remember earlier locations, and it’s not until the final zone that you’re allowed to teleport between rooms (which means you can finally take an items from one area to another, like a piece of wood that you can now light on fire and use to melt ice, or a balloon that might allow you to float to a hidden area).

The mission-based gameplay also conflicts with the item collection: the hidden, punny Boos (e.g., GumBoo, Boo B. Trap, Booreaucrat, Boolean) appear only once per mission, so if you miss one, you’ll have to replay the entire stage just to grab him. The same goes for the thirteen gemstones scattered across each mansion: some can only be gained in specific missions, but because you’re not told which, this can lead to a lot of unnecessary backtracking and replay, something that could have easily been settled by simply opening up a free-roam mode after beating the boss haunting each mansion. These missions also call attention to the repetition of puzzles: the first time that a ghost dog steals a key from your inventory, forcing you to follow its phantasmal trail through the manor, it’s a clever deviation from your standard scan-and-suck surveying. By the third time, you’ve seen it all already; you’re just doing it in a different location. Whether six ghosts are hiding windmill vanes throughout the various rooms, or whether it’s three ghosts who must be defeated in order to release their phantom locks, it’s all familiar. By the fourth time that you’re freeing and escorting a quivering and quaking Toad to an exit portal, you sort of want to just hand him over to the ghosts; these game-lengthening devices aren’t doing anybody a favor. And mind you, these are the more interesting of the mission types: you’re usually just sucking on the various objects in a room, hoping that one will reveal the key you’re looking for.

However, when Dark Moon is clever, these devices aren’t nearly as noticeable. For instance, there are some rare instances where missions are necessary, as the composition of the manor actually changes after key events. For instance, the lower levels of the Haunted Towers become flooded after you turn the hydroelectric generator back on, and avalanches block off portions of the Secret Mine; there’s even a timed mission that requires you to have fully mastered your ghostbusting technique. Likewise, most boss fights feel different enough from the regular game to warrant special attention: rather than sucking down ghosts, you’re tasked with avoiding them long enough to reveal a weak spot, be that by sweeping the rug out from under a suit of armor, rail-shooting away a protective ice shield, or tricking a spider into lighting its web on fire; the finale’s illusion-filled gauntlet really puts your skills to the test. Varied gameplay is what keeps you from plodding through the same hallways, either because you’re in alternate versions, or because you’re too busy to care. (This was used to great effect throughout Resident Evil: Revelations.) Too often, however, the game falls back on backtracking, minimizing this only through the inclusion of a mini-map that always shows your next objective; the curse of a good level is that it raises the standards for the mediocre ones surrounding it. Prolonging an experience doesn’t make it better; just ask anything you’ve ever cooked in the oven; why dilute the quality of the core gameplay by throwing in a high-score tracker, as if this is about setting speed run records, or as if the collected treasure does anything more than upgrade your equipment?

A few final quibbles: while I understand that portable games are supposed to exist in a shorter form for the on-the-go, pick-up-and-play gamer, the easiest solution has always been to simply include a Quick Save option, not to restructure your entire game around missions in some sort of Nintendo Nanny State. (Consider Metal Gear Solid vs. Metal Gear Solid: Peace Walker.) Last but not least, isn’t it about time that Nintendo characters stopped speaking in gibberish? Nobody’s asking for voice-acting–not when the quality of the game itself is worth a thousand words–but when the genius professor E. Gadd keeps burbling nonsense, I feel like Danny Glover: too old for this shit. And that’d be a shame: the appeal of Dark Moon lies in the fact that it speaks for itself . . . even if it doesn’t know when to stop talking.

2 thoughts on “Salvage: Can You Be Haunted Twenty Minutes At a Time in Luigi’s Mansion: Dark Moon?”